An attraction of Washington Grove is its great variety of trees, some of which are hidden gems and a pleasure to discover. Discussed here are three “living fossils” from Asia that have no close relatives among other plants. We hope that readers will use this information to seek out and enjoy these trees. With that enticement, what do umbrella pine, ginkgo, and dawn redwood look like and where can they be found? 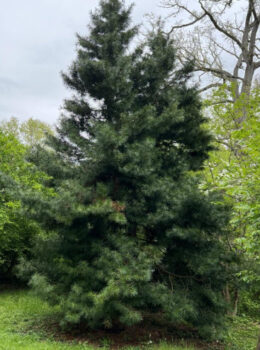 A large, full specimen of umbrella pine on Oak Street between Grove and Chestnut Avenues.

A survivor of the Permian-Triassic extinction event 250 million years ago when 57% of biological families disappeared, umbrella pine is not actually a pine, being the only species in the family Sciadopityaceae. Native to southern Japan, the durable wood is used in construction and to a limited extent for boat building and certain kinds of furniture. Although not endangered, logging and land use changes have led to a fragmented population where remaining stands have fewer than 100 individuals.

Umbrella pine is an evergreen tree that grows slowly but can reach greater than 30 feet in height and 20 feet wide. The tree requires moist, well-drained acidic soil and performs best in full sun.  The foliage is whorled, fleshy, and soft to the touch, the bark an attractive reddish bark often covered by the dense foliage. For home landscapes, look for ‘Gruene Kugel’ which stays tight and compact at only 8’ tall and 4’ wide and ‘Joe Kozey’, which is narrow, tall, and straight, only 6’ – 8’ feet wide. All varieties are expensive and attract attention.

Also called maidenhair tree because the leaves resemble those of maidenhair fern, the distinctive leaves are fan shaped and the stout stems look prehistoric. In fall, the bright yellow leaves all drop overnight. Gingkoes adapt to many types of soil, growing 50’to 80’ in height with variable width. The only plant in the entire order, ginkgo sits somewhere in origin between ferns and conifers and is even older than the umbrella pine. Because the female fruit is notoriously messy and malodorous, most people prefer male plants. 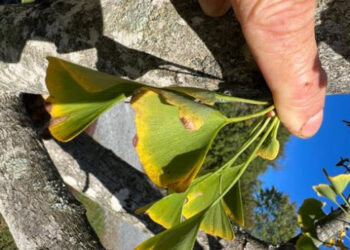 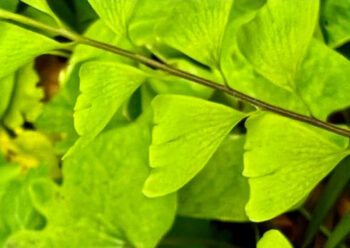 Leaves of a maidenhair fern

Its size makes ginkgo an excellent specimen tree for parks. The Goldspire/‘Blagon’ variety is tight and narrow, 45’ tall by 10’ to 15’ wide, making it potentially a good screening tree and choice for home landscapes. 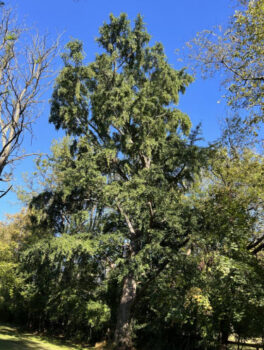 Magnificent specimen of ginkgo next to the rear yard of 201 Chestnut Avenue. 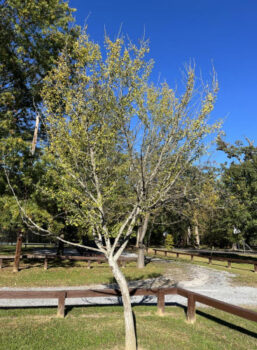 Small ginkgo off the gravel section of Oak St next to Woodward Park.

Dawn redwood has been described as having “one of the most exciting plant discovery stories of all time”. The tree was believed to have been extinct for millions of years until a Chinese biologist found it during World War II in a remote area of Szechuan where very few of the trees remained. In 1948, seeds were sent to the Arnold Arboretum outside of Boston, where trees were propagated.  Now it can be found throughout the United States.

Dawn redwood is distantly related to California’s redwoods, though it does not reach their height.  Requiring full sun, it is fast growing to 70’ to 100’ tall and 25’ wide. Its large size and tendency to from wide root buttresses make dawn redwood best suited for large open spaces.

A medium-sized tree is off 1st street between 313 Grove Ave and 2 The Circle.  A small tree is nearly hidden among other trees on the east side of Woodward Park. 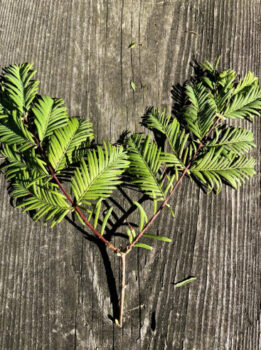 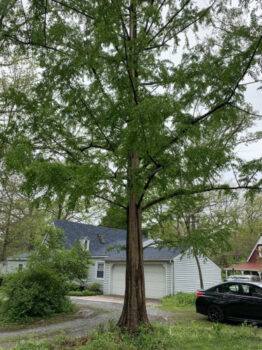 All three of these trees make excellent accent plants. They have few pests and, conversely, will attract few feeding insects.