Tilia (linden) is a genus of about 30 species of trees and bushes, native throughout most of the temperate Northern Hemisphere. Two species of lindens are familiar to Maryland landscapes: Tilia cordata (little-leaf) and Tilia americana (American basswood). Linden is a plural German word for Tilia cordata. It was this name that stuck in the U.S., while in England, the tree is commonly known as lime tree (no relation to the citrus tree). Linden is a familiar place name in Europe. Unter den Linden is an historic avenue in Berlin, ending at the Brandenburg gate. The Unterlinden museum in the city of Colmar in Alsace is one of the most important French museums outside of Paris.

Linden is one of the softest woods, similar in hardness to white pine, making it easy to carve. The cut surface has minimal grain and a buttery appearance. The first photo below shows a block of little-leaf wood that was later carved by town resident Joe Clark from an historic tree originally brought to an estate in Yarmouth Maine from England by Frederick Law Olmsted in the late 19th century (Photo #1). It is a popular wood for model building and for intricate carving. The finest works of the great British sculptor Grinling Gibbons (1648–1721) were carved from limewood. Neither little-leaf linden nor basswood is used commonly in construction.

A distinctive feature of linden leaves is a single bract that holds the flower in the spring and the fruit through the summer (Photo #2). Leaves are alternate, simple, and have serrated margins. Fall color is yellow. They tend to sucker from the base but have few other problems.

The little-leaf linden leaf is heart-shaped, 2”-3” long with an uneven base, growing to 40’ to 55’ tall and 20’ to 35’ wide. Because it is more tolerant of heat and compacted soils than the native basswood, it is a more valuable shade and specimen tree, often pruned as a hedge or pollarded as in Europe. They make good street trees and are now used as replacement trees for ashes killed by the emerald ash borer. A row of young little-leaf lindens can be seen in the Piedmont Crossing neighborhood along the side of Picea View Ct. between it and Ridge Rd.

American basswood is native to Montgomery County, though somewhat uncommon. Leaves are 2”-8” long and almost as wide and are more coarsely toothed than those of the little-leaf linden (Photo #3). It is also a more majestic tree, growing 40’to 80’ tall, 40’ to 70’ wide. The inner bark has historically been used in making rope, mats, baskets, and fishing nets.

A few lindens can be found along Washington Grove streets. Of interest, both varieties are on the Methodist Church property on Chestnut Road. Adjacent to the church building facing the road is a mature basswood (Photo #4). The little-leaf linden is at the corner of Chestnut and Center (Photo #5). True to their descriptions, the basswood is considerably larger than the little-leaf linden.

The highly invasive hairy crabweed (Fatoua villosa) will grow rapidly in a landscape that has been recently disturbed (Photo #6). It is also known as mulberry weed because the leaves can resemble those of a mulberry tree seedling.  The plant arrived in the United States in the latter half of the 20th century from Eastern Asia. It is an annual plant spread by seeds, which are produced when the plants are only a few inches tall … by the three-leaf stage!  Mature plants can shoot seeds explosively up to four feet away. Seeds germinate from early spring through late fall, resulting in many generations per year.  The plant is easily removed, but because it has a brittle stem it is best to grasp the plant close to the soil to pull it out. Another means of control is to apply 2-3” mulch on your flower beds prior to emergence in early in spring. 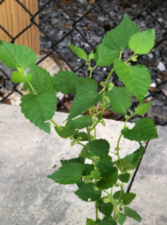