Fueling Conversations with Young People about Energy and Climate Change

On this page, you’ll find links to materials to help start conversations with your kids and grandkids about energy and climate change.

A Chat with the Professor about…

A Chat with the Professor about Alternative Fuels

Professor: Neither did I till I looked it up!

Professor: Not when you need to know something. Here’s what I’ve learned: In our country, the term “alternative fuels” for transportation generally means fuels that are used instead of petroleum, such as natural gas, hydrogen, ethanol, methanol, electricity, and even vegetable oil.

Kid: I know what electricity is and vegetable oil but not all those other things you mentioned…

Professor: Oh, sorry. But did you get the point that there are a lot of fuels besides gasoline for running our vehicles?

Kid: Yeah, I guess. But why do I need to know that?

Professor: Well…most likely the vehicles you ride in and drive over most of your life…the cars, planes, and trains of the future…will use alternative fuels of some sort. For example, gassing up our cars is going to end before too many more years.

Kid: WHAT?!  How am I going to get to soccer if mom can’t put gas in the car?

Professor: Better than going to the gas station, she might just plug your car into an electrical socket in your garage or at a curb somewhere or maybe at this electric charging station in the garage at Downtown Crown in Gaithersburg: 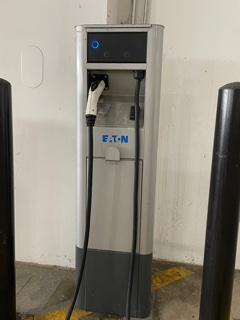 Or this charging station on Nelson Street in Rockville: 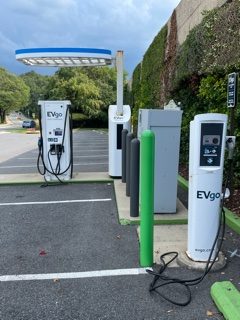 Kid: What else you got for me, Professor?

Professor: Think about this:

I know a man called Jules.
He ridicules alternative fuels.
He shouldn’t be such a skeptic:
His next car could be electric!

A Chat with the Professor about Big Change

Kid: Hi Professor. I need to talk to you. I’m really worried.

Professor: I’m at your service. Wassup?

Kid: I keep hearing about climate change and I don’t know how to save the earth…

Professor: Whoa, buddy! You can help, of course, but it’s not your job. The big people are on it.

Kid: But can they even do it? I’m beginning to think my life might not be so much fun.

Professor: I’ll be honest. It’s not going to be easy. But here’s something important you should know…

Kid: What’s that? I need some help here.

Professor: We have made big changes in the past and we can do it again.

Professor: Well, here’s one. Did you know that people used to smoke cigarettes just about anywhere they wanted? And we all just assumed it would always be like that.

Kid: Yuck. That can’t be true!

Professor: I assure you it was. We thought that would never change but we got it stopped. Here’s another one. We used to just get in our cars and drive off… no seatbelts. We just sat there until we crashed and got injured or killed.

Kid: Oh, c’mon. Nobody’s that dumb. Ya gotta fasten yourself down. What about the babies?

Professor: Oh, they went flying around loose like everybody else.

Kid: That’s so not good. Who stopped it?

Professor: We learned from what happened and changed things. Some of us weren’t happy about the changes at the time but, eventually, we pretty much saw the wisdom in doing things differently.

Professor: How about this one? Until a few years ago, we just took it for granted that every kid would get sick with chicken pox. Then smart people invented a medicine to give to kids so that the disease is pretty rare now.

Kid: I feel a little better. Any more?

Professor: One more for now…this one is more complicated but you can ask your parents about the ozone hole in our atmosphere. That was a big one that took international cooperation to do it. Many people from all over the world worked on it and got it done.

Kid: Well, that is good news. I guess when people see the problem and care enough, they can usually figure it out. I am counting on you guys to hold things together till I get big enough to take over.

A Chat with the Professor about Electricity

Professor: Where does electricity come from?

Kid: Out of the socket on the wall, of course!

Professor: True, but how does the electricity get to the socket?

Kid: Hmmm…do the wires attached to our house have something to do with it?

Professor: Right! Wires—-some above the ground and some underground—-carry electricity from generating stations to our homes. See, in this picture, electricity is created at a power station far away, then moved over long distances (transmitted) to your neighborhood, and then sent (distributed) to your house to run your TV and all the other stuff you plug in to those sockets in the walls.

Kid: But how do generating stations get the electricity?

Professor: Great question! They create electricity from fossil fuels, renewable energy, and nuclear fuel. Do you know what that stuff is?

Kid: Ah… sort of. I heard we’re not supposed to use those fossil things anymore because they aren’t good for the climate, and that renewed stuff is better. Something like that.

Professor: Hey, you’re a smart kid! Yup, we’ve been using googobs of natural gas and coal to get our electricity, and that’s got to stop because it’s not good for our future. Renewable kinds of energy are great because they don’t put carbon dioxide into the air like fossil fuels do and because we can keep getting more of them…they’re renewable! Wind and solar are two good examples of renewable sources, and we are getting more electricity from them every year.

Professor: Your best question yet! You can do a lot. First, try not to use electricity you don’t really need: turn off lights, tv’s, and other electric things when you aren’t using them. Second, ask your parents if they can get their electricity from renewable sources instead of fossil fuels. Next, keep asking your questions and learning. And, finally, remember…we’ve made big changes in how we do things many times in the past; changing from fossil fuels to renewable sources is a big job but we can do it.

Kid: Thanks, Professor. You got anything else for me?

There once was a girl named Felicity,
Who wasted a lot of electricity.
But no one can blame the poor kid;
It’s exactly what Mom and Dad did!

A Chat with the Professor about Wind and Electricity

Kid:  Some kid at school told me wind could run my computer. That sounds ridiculous. Is he a jerk?

Professor: Well, I don’t know if he’s a jerk or not, but he’s onto something about the wind running your computer.

Kid:  Oh, boy… ya gotta explain this one.

Professor: Ok, I’ll do my best. You know your computer needs juice…I mean electricity…at regular intervals or it dies, right?

Kid: Sure, and it usually says, “Low Power” right when I’m trying to finish something and I’m not near a plug.

Professor: Yup, mine, too. Well, when you plug the cord into the socket to get some electricity, that electricity has been generated from a variety of resources and one of those resources could be the wind.

Kid: Oh, so that guy wasn’t nuts who told me my computer could run on wind.

Professor: Not at all. In fact, more of our power is coming from wind-generated electricity all the time, and that’s good because the wind itself doesn’t cost us anything. We do pay to set up and maintain the the wind turbines and the connections that get the wind-generated electricity to us, but the wind itself is free and just keeps coming because it’s renewable and will never run out.

Professor:  It is, indeed. And, remarkably, buying wind-generated electricity these days is often cheaper than electricity created from natural gas or coal. And using those fossil fuels to create electricity adds a lot of carbon dioxide to our atmosphere, which is definitely not good.

Kid:  So how does the wind turn into electricity?

Professor: Glad you asked. Here’s a short video that shows how it works.   And here are some pictures I like that show how big some of the turbines are: 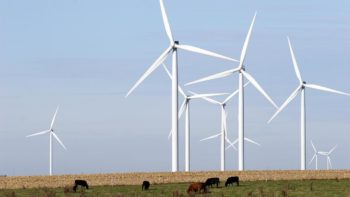 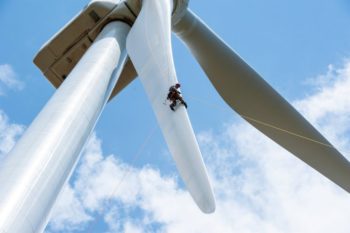 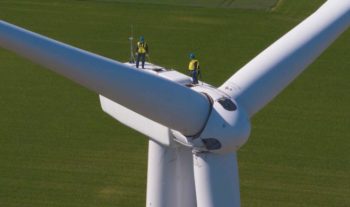 Kid: Holy cow! That’s neat. He looks like a midget up there. But now I’m wondering what happens when it’s not windy. Then what? Does the electricity just quit?

Professor: Ah, good point! Then the electric company that runs the wind turbines switches to other sources like hydropower, which is electricity created at water falls, or gets power from other areas that are still windy, or relies on power that was stored for just this purpose.

Kid: I’m glad they have backups. I don’t want my lights to ever run out.

Professor: And I don’t want your questions to ever run out.